Dearest Boo,  I often wondered if you ever felt bad about being an only child?  You never had anyone to share your room with, or your clothes, or your toys, or the bathroom, or your parents.  You never had anyone to blame if something broke, or someone to laugh at when your parents did something really stupid.  You only had me to play board games with and I hated to lose!   Your children won’t know the same joy you know of having aunts and uncles.  Your privacy was assured to you the majority of the time.  You never had anyone listening in on your phone conversations, or reading your diary, or pounding on the bathroom door yelling at you to “hurry up!”.  So, on the one hand, it’s just you! On the other hand, it’s just you.

Yesterday family gathered in celebration of your grandmother’s 80th birthday.  As I sat in the restaurant, looking at everyone, I was struck by how much I had grown.  No, not the physical grown (that one is evident), but by how much I had grown in maturity and love.  One of my father’s frequent sayings was that we needed to take care of each other, because in the end we were all that we had.  As a child I never did get what the heck he meant and as a teenager I was so irritated with that saying and all the “duties and responsibilities” attached to it.

Growing up all I knew was that if I wanted to do something or go somewhere I always had to take one of my siblings along and with five sisters and two brothers there was ALWAYS someone around.  If I wanted to go play with my best friend in the neighborhood I had to take along a sister.   If I wanted to go to Hanscom Park to ice skate I had to take along a sibling.  When I went to school I always had to walk with a sibling.  When I started a job two of my siblings tagged along and got jobs there, too.  When I wanted to go to my room to be alone that was never going to happen, as I always shared a room with my older sister.  When I did something naughty or stupid there was always a sibling around to tattle to mom and dad or to tell the story to everyone.  No memory, no experience, no joy, no sorrow……..it seemed like there was always a sibling around to share in it.  I found this quote by Linda Sunshine that says it best, “More than Santa Claus, your sister knows when you’ve been bad and good.”  I would like to add to that quote by saying “and they never let you forget”.

As it is with all get together with friends memories are always brought up; that is how you stay connected with friends.  The more you are together, the more you have to share.  The older I get the more I realize that with siblings, your childhood is never lost.  To the outside world I am this person ready to embark into her seventh decade (oh my gosh, that sure sounds old!), but to my siblings I live outside of the touch of the world.  When we look at each other we will always be the 7, 8, 9, 0r 10 year old frozen forever in time.  The memories we share now are the same ones we have shared forever, but they seem to be so funny now.  I wonder, is it because we are more understanding of our selves and accepting of our short comings?  Or are we losing our “mental fitness”?

I imagine that as a parent you try very hard not to show favoritism to any child, especially in front of another child.  However, we know who is the “pet”, the one that gets away with anything.  That poor child is the one that is “different”, the “weakest” link, the one that we can and often did use to our advantage.  If we wanted to do something out of the ordinary we would send Teri to ask permission of our mother.  We all knew that Teri was the favorite, as she was our mother’s namesake and the baby of the family.  We felt that, at least in our mother’s eyes, Teri would always get her way.  “No” was not a word in her vocabulary, she had no idea what “no” meant as the poor child had never heard that word (so not true, but it was our belief).  And if we needed our father’s permission the emissary we sent was Margaret.  She was named after his favorite high school teacher, so we knew that she was “special”.

Since Teri was too young to torture (ten years between us) Margaret was fair game to tease and torment.  We knew that she would not tattle on us, as she wanted to be a part of our “group”, she wanted to feel like she belonged.  And torment her we did, but she did manage to hold her own at times.    She and Aunt Bev had to share a bed growing up.  At night Margaret would slap her leg hard; hard enough to be heard downstairs by dad who would ask what was going on.  Sweet, little innocent Margaret would call back that Bev was hitting her and since dad knew that we were constantly picking on Margaret, he would assume that this was true and yell at Bev to behave and go to sleep.  Or the time that she was looking for a job and Bev tried to be “helpful”.  She had found an ad in the paper for having your own business selling ice cream.  What she did not tell Margaret was that it for to drive one of those awful ice cream trucks around neighborhoods ringing that bell and having children come sceaming out of their homes to you.  Another time that she bested us was at Christmas.  Our Aunt Jeanette would work hard at making sure each and everyone of her nieces and nephews had a gift at Christmas.  That means that she was buying as many as twenty-six gifts for that portion of her family.  When it came time for her to give out the gifts to us, there was always one extra one.  This gift was for “Peggy”.  For some reason Aunt Jeanette never figured out that “Peggy” was the nickname for “Margaret”, so Margaret was snagging an extra gift every Christmas!  No fair.

With the Internet I searched to find out the origins of how “Peg” became the nickname for “Margaret”.  In my search I also found out that “Daisy” is another nickname, which made sense.  The origin of Margaret is “Marguerite”, which is french for daisy.  However, “Peggy” was a harder answer.  The best I found was this anonymous as an explanation:

In search from A to Z they passed,

And “Marguerita” chose at last;

To call the baby “Marguerite.”

When grandma saw the little pet,

She called her “darling Margaret.”

Next uncle Jack and cousin Aggie

And grandpapa the right must beg

To call the lassie “bonnie Meg.”

From “Marguerita” down to “Meg,”

One episode that, I believe, finally did stop my torturing of Margaret came at the end of our teenage years.  My torturing stopped either because of the severity of the outcome of my prank or because I was growing up.  I wanted to go to one of our local fast food drive ins and, of course, I had to take along one of my sisters and Margaret yelled out to bring her something back.  Pretty sure that the sister I took was Charlotte, as she was young enough that I could easily threaten her to go along with any of my hair-brained schemes.  For me this meant freedom, there was no way that mom or dad would ever know what I did, who I saw, or anything about that outing.  We ate our food in the car and Charlotte reminded me, the good little sister that she is, that I needed to bring home a treat for Margaret.  Right, like I was going to do something nice for Margaret when I knew that dad would not be home for hours, so there would not be any repercussions for my wrong-doing in my mind.

The drive-in stall next to us had left a hot fudge sundae on their tray and drove away.  Score!  I could take that home as Margaret’s treat, appear to do something nice and it would not cost me anything!!  We brought it home and watched with joy as she ate the whole thing.  I thought to myself that this was one of my finest moments, but I was wrong.  Seeing her face when I told her that I took it off a stranger’s tray was my finest moment!  How dumb was I??  Of course she told dad once he got home and, of course, I got a lecture and grounding out of it.  No problem, I had lectures before and I was pretty sure that there would be more coming; I had been grounded before and it was no big deal.  However, it was the next day that my real punishment began.  This happened in the summer of 1968 when the Hong Kong flu was an epidemic.  As luck would have it Margaret got sick with the flu the next day.  I have no idea if it was the Hong Kong flu, but she ran around the house letting everyone know that she had the flu and it was all because of me.  She was just sure that the sundae I brought home carried in the germ.  Whatever.  All I knew was that once dad heard the story I became Margaret’s sick nurse.  Whatever she wanted I had to get, whatever she needed it was my job, and whatever mess she made I had to clean it up.  Pretty sure that there were several times that she could have made it to the bathroom, but watching my gag reflex was far more fun for her.  I hated taking care of her.  As I recall, this was the very last time I ever tried to purposefully be mean to Margaret.

Fast forward twenty-one years and there I am again taking care of a sick Margaret, but under totally different circumstances.  She was fighting a battle against breast cancer and had been fighting it for four years.  I believe that this was only her second hospitalization, so we were not prepared for the outcome.  Twenty years ago today, 7,304.84398 days, a life time ago, Margaret lost her long fought battle against cancer.  And with that passing a piece of our childhood was indeed lost.  Although absent from earth, she will forever be present in our hearts.

I found this poem that expresses my feelings and I am sure that of all my siblings:

We grew up and grew apart, as most siblings do.

I always wish you were still here with me enjoying life,

But I can understand why God would want such a beautiful angel on his side from now until eternity.

Just know that I love and miss you.

Death leaves a heartache no one can heal, love leaves a memory no one can steal (from an Irish tombstone).  Bless you, my darling, and remember you are always in the heart – oh tucked so close there is no chance of escape – of your family.   Memories of Margaret – Joy Rising! 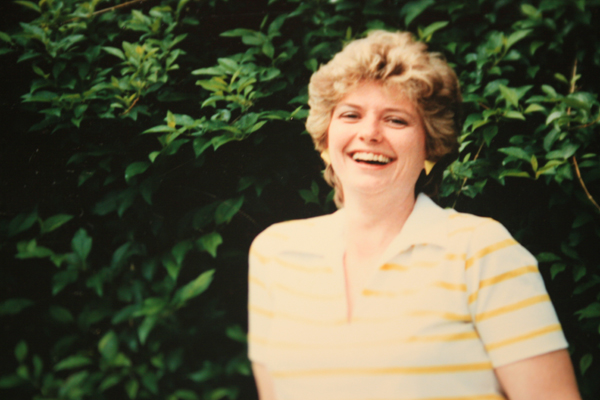