Dearest Boo,  it is so fun to try out new recipes on you!  Your “Supertaster” Buds are always there to help out when they are needed.  Heck, that kind of makes you sound like some kind of Super Hero and perhaps we should dig out the “She-Ra” costume I made for you one Halloween.

If you’re classified as a supertaster, you tend not to eat fruits and vegetables because they may taste very bitter.  You use this a lot when I try to get you to eat your vegetables, with the only exceptions being potatoes, broccoli and green beans.  However, it must be so noted that to get the broccoli and green beans into you they  must be drowning in cheese sauce.  If you’re an “undertaster,” you may be more prone to eating (and overeating) sweets because it requires more taste to satiate you. Of note, researchers say about 25 percent of us are supertasters and 25 percent are undertasters, while the rest of us are simply regular tasters.

Here is the test that we saw on television one day.  The Blue-Tongue Test: Wipe a swab of blue food dye on your tongue and inspect the small circles of pink-colored tissue that polka dot the newly painted blue tongue.  Then, put a piece of paper — with a 4 mm hole, or the size of a hole punch in three-ring paper — over your tongue.  Use a magnifying glass to count the little pink dots you see in the hole. If you count fewer then five dots, it means you’re an undertaster, while more than 30 indicates you’re probably a supertaster.

Even before we knew you were a “Supertaster” we always knew that you were a “good little eater”.  That phrase always makes us laugh, as it reminds us of our vacations at the Tanque Verde Ranch in Tuscon, Arizona.  They had something for all of us to enjoy.  There was horse back riding and trail riding for you and your father and for me they had the most awesome restaurant.

I was in seventh heaven just pulling out my chair, smelling the fragrant smells wafting from the kitchen, and my mouth would start to salivate in eager anticipation of the delights that would soon be placed in front of me.  Your father and you were always anxious to wolf down your meal and get outside to go on a trail ride in the Saguaro Desert.  Not me!  Your poor father would have to hog-tie me and drag me outside to get on my horse.  I even tried telling him that I tried to tell him that I was in training for some competitive eating contest that would be held at the end of the week and I needed to stretch out my stomach.  Competitive eaters “train” by consuming large amounts prior to the contest.  He refused to buy that argument and I would find myself outdoors, sitting on the back of some poor animal.

I remember one year my “horse of the week” was Leadbelly and his name perfectly suited this poor steed.  He was huge and slow and no matter how much I kicked his belly to get him to move he refused to leave the corral.  We would just be there, me mounted on this horse that was standing stock still.  As if we were posing for some statue.  I worried that at this rate we would never catch up with the rest of the riders and we would be like Moses and the Isrealites wandering in the desert for the next forty-years.  Eventually, he would take off like a herd of turtles.  I would like to point out that lack of speed was not his short-coming once he sensed that we were headed back to the corral.  He would become as happy as a tick on a fat dog and lead the way back home to the ranch.  I swear, he could best any time from any race in the Kentucky Derby.

One morning we got to the corral only to see a strange site.  There was a huge truck in the middle of the corral, with a big wench working on cranking up something.  Ay Yup, there was Leadbelly, flat on his back with all four legs straight up in the air.  I like to think that whenever I hear thunder it’s Leadbelly’s hoof beats in Heaven.  As I recall the wranglers asked that I not ride the rest of our time there!  Oh fine, blame it on the fat lady!

Speaking of “fat”, brings me back to why we say you are a “good little eater”.  One year I was not able to go to the dude ranch with you and your father.  That week he befriended another family who had a son named Danny.  Danny’s mother was tall and thin and could not have weighed more than 120 pounds soaking wet.  That was true of Danny, too.  He weighed 120 pounds, but Danny was only about six years old.

At the corral there was a ramp that you could walk up to the side of the horse.  You would be taller than the horse, so to mount it all you had to do was sit down.  Easy peasy.  However, about halfway way through the ride everyone got to dismount and stretch their legs and enjoy a chuck wagon lunch.  At the end of lunch everyone saddled up to head back to the ranch.  The poor female wrangler was having a dickens of a time trying to get Danny mounted back into his saddle.  She just did not have the strength necessary to lift Danny high enough.  At this point your father took pity on the wrangler and went over to help.  The wrangler was on one side of the horse holding on to Danny’s hands to help pull him up, while your father squated down and placed his hands on Danny’s butt to push him upwards.  This was not an easy task, as for all intents and purposes, at this point Danny was basically dead weight.  They were making pretty good progress, when Danny very loudly demonstrated that he had been “gulping too much air”……….”he had eaten way too many beans for breakfast”……..okay, Danny farted in your father’s face!  I must have the mentality of a ten year old boy, as fart stories still crack me up.

The only thing that farts have to do with this recipe is that farts make me laugh and I laugh with delight when I make something so delicious.  I found this recipe online and knew that I had to try it.  The recipe stated that you would get one 8 1/2 x 4 1/2 loaf, but I was able to also fill up a 4 x 2 loaf pan.  After you had one slice from the small loaf you promptly ate the rest and licked the plate.  You then threw yourself down to the floor and started kissing my feet for making this extraordinary treat for you.  Okay, maybe you did not kiss my feet – but you did eat the entire tiny loaf!  This will be added to our list of fun foods to make and give away.  Joy Rising! 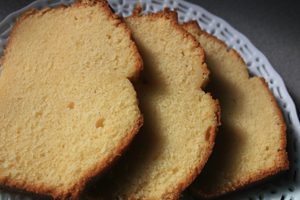 Delicious just the way it is, or covered with fruit (like a shortcake).