Dearest Boo,  I found these videos on YouTube and I could not resist, since you and I are such Cupcake Fiends.

When you were a wee one you were never really into dolls.  One time, much to my surprise you asked for a Cabbage Patch Doll.  There was such a craze for these bald headed cuties and I wanted to give you the world, so I was one of those awful parent who stood in line for hours and hours just to get our hands on one.  Once you got it the doll sat on a shelf in your bedroom, still in the package.  Pretty sure it is buried someplace in our basement today.  Then there was Barbie.  It was not exactly the Barbie doll that you wanted, it was all her horses.  First there was Tawney, then Dancer, Dallas, Midnight, Honey, Dixie, Silky Mane, Sun Runner and lastly for you Western Star.  Of course, we had to get a couple of Barbies and Skippers and Ken doll just so that you would have someone to ride your horses.  And, since their clothes were so hard for little fingers to put on, all your riders were, in all sense of the words, bare back riders.  Prancing around on your bedroom floor were Lord and Lady Godivas.

The only doll that you collected and even made any attempts to play with were the ones from the Strawberry Shortcake series.  Not sure what was the attraction with these dolls.  Maybe it was because each one was made to emit a long lasting fragrance based on fruits, flowers and candies.  And, a bonus for you, each one came with their own little pet.    Some of the ones you had were:

Of course, you real true collectible love was the Breyer’s Traditional Horses.  No wait, it was a tie between Breyer’s and My Little Ponies.  The My Little Ponies were ever so much cheaper and we must have several 50 gallon tubes of them in our basement.  In looking at them I am embarrassed at how much I “enabled” this addiction of yours.   This line of plastic toys came out in 1983, the same time that your obsession with horses started.  Although, to be fair, most little girls have a slight obsession with horses at about this age.  They were the rage in the 1980’s and at one time outsold Mattel’s Barbie doll.  In thinking about all your MLP we own I am thinking that Hasbro should have sent me at least a thank you note for making that event happen all by myself.

According to WikiPedia  many different sets of Little Ponies were produced, starting with the Rainbow Ponies (which all sported rainbow-colored manes and tails) in 1983. Other variations included the So-Soft Ponies (which were entirely covered in flocking), Twinkle-Eyed Ponies (with small rhinestones in place of the eyes), Twice As Fancy Ponies (with sigils covering most of the body), and Brush n’ Grow Ponies (which had a longer-than-usual tail stored inside the body that could be drawn out through brushing).   There were also the Earth Ponies (which had symbols on their haunches representing their names), followed by the Pegasus Ponies, Unicorn Ponies, Flutter Wing Ponies, Windy Wing Ponies, and Summer Wing Ponies.  The last grouping of ponies that I can remember buying were the Sea Ponies.  Each night you could find the entire “fleet” of Sea Ponies in the bathtub with you.  I realized that I had to stop the buying insanity when the three inches of water in the tub was totally displaced by the gazillion Sea Ponies who filled the tub to overflowing.

As much as you loved the MLP and loved to play with them, the Breyer’s horses were on a totally different level.  And by “level” I mean shelves.  Your Breyer horses were named, for the most part, after breds of horses or a famous horse.  For you those were the ” Piece de resistance” to your collections.  This collections was not for playing, it was strictly for collecting.  The joy for you was to collect them for their beauty and for the sheer joy of the appreciation of their workmanship.  In looking at the horse it was as if some evil Wizard had zapped them down in scale.  They were just so perfect.  And the joy was also in the hunt for the latest model in this collection.  This was long before the Internet, so we had to rely on us blindly stumbling into a store and seeing the new horse on the self, as a new one came out maybe two or three times a year.

The last time I can remember our buying on was the day that will forever be known in our family as the “Day of the Knife”.  We were visiting some friends and the men were out golfing, so we three “girls” (Barb F. you and I) decided to go shopping.  As we were shopping when what do we discover but a new Traditional Breyer horse, of course we had to buy it.  Once we were in the car Barb and I started to talk and you asked if you could open up your horse.  Of course, no problem.  The box was opened and the horse was removed, only to discover that it was attached to the cardboard insert by those nasty plastic ties, problem.  Aha!  You remembered that I had a pocket knife in my purse, so you asked to use it, problem solved.  Barb and I were busy talking in the front seat and you were busy in the back seat, quietly setting about to release your horse.  In my memory what happened next could easily have been called “Nightmare on 120th Street”.  All I remember is your tiny little voice saying that you cut yourself, sticking your arm between the front seats for me to see, and then terror set in.  In my mind you had cut your artery and your blood was pumping in a steady beat, like a geyser, all over the front windshield, the car seats, Barb and myself.  I was too terrified to turn around to see if Freddy Krueger was in the back seat with you.  Luckily, my “momsense” kicked in and we got you to an emergency room.  My memory of the emergency room is blocked, thank God, as I am sure I was a screaming whack-a-doodle about the fact that my precious daughter was bleeding to death and it was all my fault for giving her that machete knife to injure herself.  After the poor nurses got me calmed down they assured me that your finger would only need a couple of stitches.  Seriously?  All that blood from a tiny finger cut??  Lord help me if ever I am in a real emergency!  Pretty sure I will not be any help at all.  Once we got out to Barb’s car I could clearly, and sanely, see that the “geyser” of blood in my mind’s eye was only maybe four big drops and took no time at all to clean up.  All in all, it may not have been that much, but it does make for a great “family legend” of the day we learned that you are not that good with knives and I am not that good with blood.  Oh, by the way…….Happy 17th Anniversary of the Great Finger Cut!  And I can say that you have learned how to use a knife correctly and safely.  Joy Rising!

A couple of  pictures of some of the 115 cupcakes that I made for Cindy’s Dad’s 80th birthday.  So much fun to get creative in the kitchen!  The flavors we decided upon were Red Velvet with Cream Cheese Frosting, Raspberry with White Chocolate Raspberry Frosting, Mint Chocolate with Grasshopper Frosting, Apple with Apple Cinnamon Frosting, Chocolate with Mocha Frosting, Key Lime with Toasted Coconut Frosting, Vanilla with Butterscotch Frosting.  My favorite was the Key Lime, but you loved them all.  Bless your heart!  Yesterday I made Dr. Pepper Cupcakes with Whipped Chocolate Frosting and some with Cherry 7-Minute Frosting.  Way too many for us to eat, however, bless your heart you do take after me, you want to take some to work for your co-worker to enjoy and I will spend this afternoon going up and down our street looking for some dear soul who will take the rest. 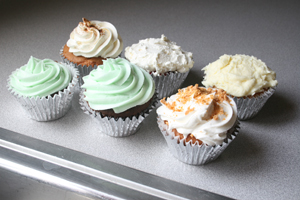 Above are the birthday cupcakes and below are the Happy Friday Chocolate Cherry Dr. Pepper cupcakes. 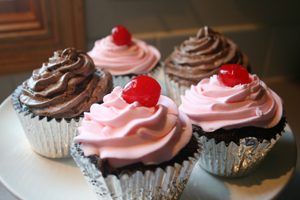 Here is the recipe for the Chocolate Cherry Dr. Pepper Cupcake.