Dearest Boo, what a Christmas we experienced! Since Tuesday night, the 22nd, we have been under a storm watch. Tuesday night we had brief showers, which turned into ice. Luckily, that was only about 1/4″. Wednesday more of the same, but then that afternoon the snow and wind started. We had snow and wind until Saturday afternoon. This was a full out blizzard. Blizzards are severe winter storms that pack a combination of blowing snow and wind resulting in very low visibilities. While heavy snowfalls and severe cold often accompany blizzards, they are not required. Sometimes strong winds pick up snow that has already fallen, creating a blizzard. Officially, the National Weather Service defines a blizzard as large amounts of falling OR blowing snow with winds in excess of 35 mph and visibilities of less than 1/4 of a mile for an extended period of time (greater than 3 hours). This being said, we must have had a blizzard times one million. I shoveled out the driveway at least three times on Thursday, four times on Friday and twice on Saturday. The weather report says that it was 10″ to 12″, but the strong winds kept drifting shut our driveway. I know that I shoveled the same snow at least seven times off the driveway.

If I never see another snow flake again I will be one happy little camper. The definition of snow is frozen water that falls from the sky. All snow flakes have six sides, but no two snow flakes are the same. Sorry, Mother Nature, but I was outside long enough shoveling to know that I HAD to have seen some double snowflakes, twins if you will – maybe even triplets! There is no way possible that there could be that many flakes and not have any alike.

Getting up this morning to the sound of the snow plows was not that exciting, as I knew that meant there would be a giant sized pile of crusted, heavy snow to shovel from the end of the driveway. Laying in bed, not wanting to get up, I had a light bulb moment. I am a Snow Dummy! We don’t have a snow blower, except for ourselves…….and you would think that I could remember how to shovel snow after all these years of living in Nebraska. But no, I must have had brain freeze when I was outdoors. I would shovel the snow up onto the yard, just at the edge of the driveway. Dummy, dummy, dummy. It was piled so high, that when the wind came blowing over it, the wind would just blow it all back into the driveway. I must have been shoveling the same 10″ – 12″ of snow for the past three days. And now I get to go back outdoors and shovel it again. However, this time I am going to be smarter than the average snow flake! First I will move the large piles of snow that is lining the driveway, to get rid of the “World’s Largest Snow Tunnel” that I created.

Boo, I know that your Christmas was made special because your BF, John, was able to be here for five days. Luckily, he was able to fly out for home on Monday. I say lucky for him, as if he had waited one or two days he would have been stranded here and not able to be with his family for Christmas. And really lucky for him, as if he were here he would be doing the one shoveling with me instead of you. Asking you to be outdoors in the cold wind always worries me, as I don’t want to trigger an asthma attack for you. You are always mindful of being ready to help, but I do still worry.

One of John’s gifts from us was to try to re-created his favorite dish from Macaroni Grill, Penne with vodka Sauce. No problem, I knew that your little friend, Giada De Laurentiis, would not let us down – and I was right. She had a recipe on her website. I fixed it for him the Friday night that he was here. It was easy and delicious – only problem being that it was not the same at all. What you did not remember was that it had sausage and was baked. Okay, okay – easy fix. So, Sunday, when I was in Omaha celebrating Christmas with my mother, siblings and their families, you were able to make the dish for him. I think that it was a success, not exact but pretty darn close. It is a dish that we will fix again. The picture is not all that good, but it shows how successful you were. The smell was so intoxicating that you both just chowed down, without taking a picture first. This picture is of the leftovers.  Oh, Italian food – Joy Rising! 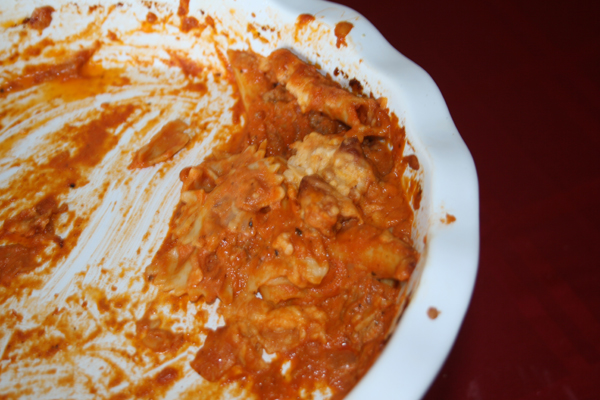