Dearest Boo,  one of the many things we have in common is our love of musicals.  Especially the “old” musicals, like “Singing in the Rain”, “The Sound of Music”, “Joseph and The Amazing Technicolor Dreamcoat” and “Fiddler on the Roof”.

Set in 1905, Fiddler on the Roof takes place in Anatevka, a small Jewish village in Russia. The story revolves around the dairyman Tevye, his wife Golde, his five daughters  and his attempts to preserve his family’s traditions in the face of a changing world. When his eldest daughter, Tzeitel, begs him to let her marry a poor tailor rather than the middle-aged butcher that he has already chosen for her, Tevye must choose between his own daughter’s happiness and those beloved traditions that keep the outside world at bay. Meanwhile, there are other dangerous forces at work in Anatevka which threaten to destroy the very life he is trying to preserve.

(first lines spoken by Tevye)
”A fiddler on the roof. Sounds crazy, no? But here, in our little village of Anatevka, you might say every one of us is a fiddler on the roof trying to scratch out a pleasant, simple tune without breaking his neck. It isn’t easy. You may ask ‘Why do we stay up there if it’s so dangerous?’ Well, we stay because Anatevka is our home. And how do we keep our balance? That I can tell you in one word: tradition! Traditions, traditions. Without our traditions our lives would be as shaky as, as… as a fiddler on the roof!”

Traditions in families are so important and especially traditions for holidays.  When you were a wee little one I started the tradition of making an “egg” tree in our front yard just for you.  We would take the colorful plastic Easter eggs, poke a hole through the top side, string a looped cord through the hole and glue the top and bottom pieces together.  Then you would hang the eggs on one of your favorite trees in the front yard.  Every year we would have to get more eggs, as the tree had grown out more branches.  You were so thrilled when your friends would come by to see our tree and tell you.  One year it was super warm and you climbed the tree to decorate while in your swim suit.  I can still see the joy on your face the next day to see your picture in our newspaper!  Of course, the hardest part for you was always when we had to remove the eggs from the tree.  One year, some how, we missed an egg and never noticed it amongst all the leaves.  It stayed there until the cord rotted and the egg fell from the tree on it’s own.

Our tradition on the fourth of July was to have our friends gather in our back yard for our own fireworks display.  There were some years that we must have had 35-40 people who had pooled all their fireworks together.  The city where you grew up allows fireworks in the city limits and we all took advantage of that fact.  The men, who I suspect were all closet pyromanics, would purchase tons of fireworks – some even going to Missouri to get the illegal ones.  One year one of the men purchased a super, special treat and, like a five year old with a great secret, was so gleeful in letting us all know that his had to be the finale this year.  He kept running between the lighting stations to see how much longer before he was able to get his set up.  He reminded me of the little ducks that would go from side to side in a carnival shooting gallery.  Finally, he was able to get set up, putting it on a four inch thick board and covering the board with a metal bucket.  He made sure that he had the attention of the entire crowd and with a diabolical giggle let the fuse.  There was a loud explosion, the board went flying to one side and the bucket lifted off into the sky.  When it was safe he ran to find the board and bucket to show them off to the crowds.  The board had a four inch diameter whole through it and the bucket, well, it was a good thing that we knew it started out as a bucket because it sure did not look like a bucket now.  It was a mangled mess.  The men were all impressed when he shared the fact that he had lit off an M-80.

Another holiday tradition was on Halloween.  You never liked going out to get the treats.  You would much rather spend time decorating our home for all your little friends to see.  You would have on your Halloween costume and I would take your picture with each of your friends as they came to our door.  The decorations were not always successful, but we did have fun.  One year we put dry ice in a cauldron, but it failed.  We had too large of a cauldron and too little ice.  Not much effects there to be seen.  One of your favorite memories was the year that we decorated our player piano with fake cobwebs.  Our player piano operated with a disk, not the paper rolls.  We purchased a disk that would play “scary” type of music.  You would watch from the window for the trick or treaters to come down the walk and would race to hit the play button on the piano.  That was so much fun for you.

At Christmas time, when you were younger, you always wanted to help decorate the tree.  You had your favorite ornament, a grandfather clock, that you HAD to put on before any other ornaments.  And if we forgot and started to put on other ornaments you would get so upset.  We had to take off all the ornaments until you put on the clock and this took fovever, as you are a Little Miss Perfection.  In your mind the clock ornament had to be in the exact same place every year.  One would think that this would not be that much of an ordeal, but one would be wrong.  Even though you would say that it had to be in the same spot, it would still take you an unreal amount of time to hang the clock.  To this day neither one of us can remember why this was “the” ornament that started the “trimming of the tree”.

Of course, with each holiday there was always the traditional food that we had to prepare.  Easter was ham, which you did not like so you never ate it, Thanksgiving was the turkey and Christmas was prime rib.  The scariest part of prime rib is it’s expense.  If you screwed it up $50.00 just went out the door and that would mean a meal of plain mashed potatoes (no drippings to make gravy), broccoli with cheese sauce, some kind of roll and a dessert.  Every year I would fix a pretty great prime rib, so why this year did I decide to tempt the fates and play with tradition?  Maybe I was heady with the spirit of Julia Child?  Maybe I was still feeling the need for change?  Whatever it was I did give in to temptation.  I found a recipe online for the “Best Prime Rib”.  And I am a sucker for any recipe that claims to the “best”.

In the past I would rub salt and pepper on all sides of a 4# prime rib and then sprinkle flour on it’s top.   This would bake at 400 degrees until it seared (about 20-25 minutes), then I would turn down the oven to 325 degrees for another 1.5 hours.  Perfect every time.  Pretty easy and straight forwards………..there is a perfectly true saying “if it ain’t broke, don’t fix it”.  Why did I want to “fix” something that “ain’t broke”????

Results?   This was what the roast looked like after 7 hours of baking at 170 degrees, not medium at all.  And not a wonderful picture.  Would I try this again?  Yes, as I was able to get two slices from the sides and put the roast back into the oven for another two hours.  It was perfect and very juicy.  I only let it “air-dry” for about six hours and I am guessing that was the problem.   Oh well, guess you can teach an old dog a new trick – Joy Rising!! 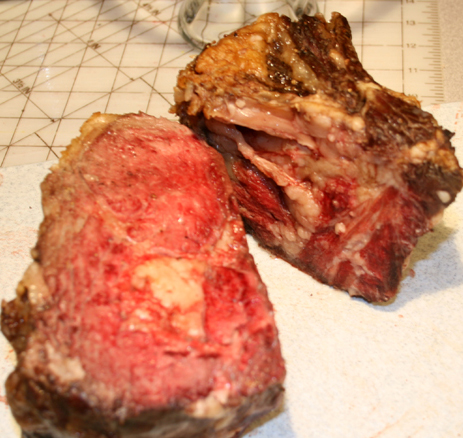 This recipe works for prime rib roasts any size from 2 ribs to 6 ribs. Plan on 1 pound of bone-in roast per guest (each rib adds 1.5 to 2 pounds to the roast). For best results, use a dry-aged, prime grade or grass-fed roast.

To further improve the crust, allow it to air-dry, uncovered in the refrigerator on a rack overnight before roasting. Seasoning with salt up to a day in advance will help the seasoning penetrate the meat more deeply. If timing goes off and your roast is ready long before your guests are, the roast can be re-heated by placing in a 200°F oven for 45 minutes before continuing with step 2.

1. Preheat oven to lowest possible temperature setting, 150°F or greater (some ovens can’t hold a temperature below 200°F). Season roast generously with kosher salt and fresh ground black pepper. Place roast, with fat cap up, on v-rack set in large roasting pan. Place in oven and cook until center of roast registers 120°F on an instant-read thermometer for medium-rare, or 135°F for medium. In a 150°F oven, this will take around 5 1/2 to 6 1/2 hours. In a 200°F oven, this will take 3 1/2 to 4 hours.

2. Remove roast from oven and tent tightly with aluminum foil. Place in a warm spot in the kitchen and allow to rest for at least 30 minutes, and up to an hour and a half. Meanwhile, preheat oven to highest possible temperature setting (500°F to 550°F)

3. 10 minutes before guests are ready to be served, remove foil, and place roast back in hot oven and cook until well-browned and crisp on the exterior, 6-10 minutes. Remove from oven, carve, and serve immediately.