Right or wrong (see what I mean!) when you were young we did not “baby down” our life.  You ate basically the same food we did; your schedule adjusted to our’s (that is until I realized that you were a night owl and I was a “lark”.  And it has not changed to this date.  You still can stay up all night and function passably the next day.  Me?  I need to be asleep by 10 p.m. and I am up and ready to go by 5 a.m.); and you went wherever we went, as much as possible.

We loved going to movies, so you did, too.  The easy movies were in the summer when we were able to go to the local drive-in (not the eating drive-ins, but in our town we had a place where you drove into a giant parking lot, hooked up a wire to the car for the movie audio, and sat comfortably in your car to watch the movie on a giant screen).   We just strapped you into your car seat, loaded up the diaper bag with any supplies we might need and away we went.  Once we got there I sat in the back seat with you until you fell asleep, which usually was before the movie started.  If, by chance, you were fussy all I had to do was to walk with you around the car and you quickly fell asleep.  What a perfect child you were!  However, soon came the Fall and Winter months – no drive in movies.  We decided to take our chances with you in the indoor theatre.  Again, we strapped you into your car seat, loaded up the diaper bags with any supplies we may need and away we went.  The only thing different was that I brought along your Snuggli sack.  In case you don’t remember this was this wonderful invention that the adult would wear that looked like several straps from the back that would wrap around the wearer, but had a pouch/bag in the front where you would put the baby.  Much like how a kangaroo would carry their joey.

During your infant days we had two students from Japan staying with us during the summer.  They were part of an orchestra from Tokyo that were on a exchange with our local university.  These two young men would just giggle when your head would poke up from the top of the pouch or when you tried to sit up.  It appeared like your neck was hyper-extended from your body.  They told us that it reminded them of a turtle poking it’s head out from it’s shell.  And I believe that you were totally entranced by these two.  Whenever they were around all you could do was to follow them with your eyes and you wanted them to come over to entertain you, which they did willingly.  It was so sad to see them go, but when they got back home they sent you a big package of treats from Japan.  I cannot remember all of them, but I do remember the baby kimono they sent.  It was white and had colorful, cartoon-like characters of turtles and frogs.  I wish I had some of the pictures we took of you in your kimono.

Okay, back to the movies.  The very first movie that I remember you being totally, and I do mean totally, in awe and fully engaged in was the second Star Wars movie, “The Empire Strikes Back”.   You were almost two months old when it was first released, so I am not sure if this happened at our first viewing of the movie or if it played again later that same year and we all saw it together again.  However, what I do remember clearly happening was that you sat up right on my knees, as close to the screen as you can get without climbing over all the seats in front of us.  Our cousin from Lexington, Edie, was there to witness this phenomenon.  I swear to you……….you were sitting there back as stiff as any board just staring at the screen.  Taking it all in.  At first I thought it was so cute.  My little Boo, at such a tender young age, could concentrate and focus for such a long time.

Why, I was sure that I had a budding genius on my hands.  Okay, if not a budding genius then maybe a George Lucas or Steven Spielberg or Peter Jackson (okay, maybe he wasn’t doing his directing thing at this time).  Alas, I believe what I was witnessing was the “Birth of the Geek”.  Yes, Geek.  I said it and I meant it.  My sweet, precious little girl is a geek.  At it was true.  You could not get enough of things like “Star Wars” or “Star Trek”.  You even enjoyed watching the original “Star Trek” episodes on television with Leonard Nimoy and William Shatner.  And then you moved on into computer geekiness.  Of that I am so thrilled, as it is like have my very own Geek Squad 24/7.

Every year for Christmas I give you a cookbook that I think you will enjoy and perhaps spur interest in cooking/baking.  Last year I gave you Giada DiLaurentiis “Everyday Pasta”.  We did get some great recipes out of the book, but I was the one doing the cooking taking directions from you.  Hey….maybe you do have some “directors” genius inside of you after all!  This year I gave you “The Star Wars Wookie Cookie Cookbook”.  Once again, you gave me direction on which of the recipes you would like us to try.  I decided to pick from your selection the one that starred my favorite charter from “Star Wars”.  When I finished it in no way looked like R2D2.  It looked nothing like the picture in the cookbook.  As a matter of fact, it looked more like Chewbacca caught in a Tatoonie sand storm.  I fully expected to see Lando Calrissian and Luke Skywalker to come running into the room having escaped from Jabba.   However, it may look like a failure, it tasted amazing.  You loved it.  Maybe, some day, they will serve this at Mos Eisley Cantina?  Joy Rising!! 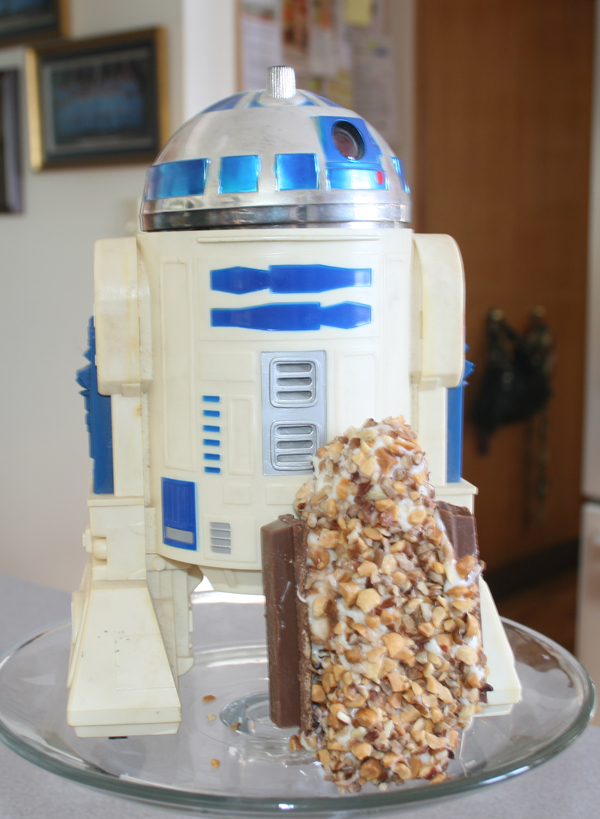