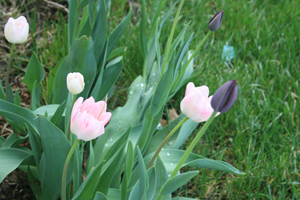 Dearest Boo,  today is the 40th year in celebration of Earth Day.    This is a picture of some of the tulips in our front yard.  I can hardly wait for the black ones to open.  They were planted last fall, so I am waiting with bated breath as I have no idea what they will look like.  Tulips are so beautiful and delicate and gentle looking.  If only their flowers would last longer, they could be the most perfect flower.  The pink tulip is the most soft pink color, with ivory color marbled throughout.  They are like the Goldilocks of the flower kingdom – not too elegant, not to romantic, not too big, not too small, not too bright….tulips are just right.  It’s like looking at a plate of fresh cookies hot from the oven, while you are in your favorite sweats.  They just make me think of home and comfort.  They are just perfect in their simplicity and beauty.  When I look at a tulip I feel at peace.   I think that when the tulips are in bloom the people of Holland and Pella, Iowa must have their own slice of Heaven.

Today I am thinking a lot about your dad’s cousin.  It is so sad to hear news that someone that you have always felt was so strong, so larger than life, is having health issues.  It just stinks.  He is a man who is a great communicator, someone who loved to talk, loved to make you laugh, loved to argue for the sheer joy of arguing now is having difficulty with his speech.  When he was a teacher he did it with great joy and love and it showed.  So many of his students enjoyed (as much as students can enjoy) his classes and the respect he showed to them.  He has always been a champion of education and teachers and the very important job they do in preparing our young people to go out and conquer the world.  Giving them skills they would need in their everyday life.

I remember our vacations together to Minnesota for our fishing week.  Our first trips were in the mid-1970’s when CB radios were the rage.  Oh, I wish I could remember what our “handles” were, as I am positive that they were very clever and funny, because we were and still are very clever and funny people! (Update – Stuart remembers the names!  Lowell was “Yellow Dog”, Stuart was “Big Blue Heron” and your father was “Auggie Doggie”)  Lowell, Edie, Suzan, Stuart, and Teddy (their dog) were the lead car.  In the second car was your dad and I and his dog, Doc.  On the drive to Park Rapids, Minnesota, we would listen to the truckers and visit over the CB with each other.  They have always been my favorite people to travel with for vacations.

One trip I remember we were talking back and forth and Lowell was commenting about the awful smell outside.  We were driving through farm country, so awful smells outside the car was not that surprising.  We rolled down our window, but we did not notice any smell.  That family must have some powerful noses to smell this tiny, minuscule smell!   This went on back and forth for at least twenty miles with their car wondering what was wrong with us that we could not smell the stink.  Suddenly, their car pulled off the highway quickly – and before we could react all four car doors opened and they all tumbled out of their car.  We had no idea what was happening.  One minute we were talking on the CBs, the next minute they were all out of their car shouting and pointing.  What in the world was going on??  It seems that Stuart discovered what was the cause of the smell.  Teddy had had diarrhea all over the back section of their station wagon!  Once we were able to control our laughter, we got together to clean up their car – but, if memory serves me correctly – Stuart and Suzan made the rest of the trip to Minnesota in our car.

We always stayed at the same resort at Bottle Lake, Wambolt’s, pictured above.    When I first saw this “resort” I was sure that it was something directly out of “Deliverance” and I searched the woods to see if one of the river men were there for us.  I knew that I could hear the music “Dueling Banjos” coming from somewhere.  The cabin we stayed in did not have indoor plumbing, so we shared the outhouse with almost the rest of the resort. Lowell and his family had the largest cabin and it did have indoor plumbing.  The shower was located in the middle of the living room.  They did not have to walk through the pitch black to get to the bathroom in the middle of the night.  One year the cabin next to their’s had bats flying around inside.  I remember going to the store on the grounds that the resort owner’s operated.  In their store they had bait, mostly worms, some groceries and tons of candy.  Stuart was in seventh heaven.  He was flying on a sugar high the entire week.   Suzan was just thrilled each and every morning to have her giant bowl of cereal.  Bottle Lake was not full of fish, but it was full of leeches and Stuart was a leech magnet.  Anytime that child would get near the water his body would be covered with those black, slimy, squiggly things.  To see them all over his precious little face was more than I could bear to see.  The more I freaked out, the more leeches that child would find.  Ick, ick, ick.

The cabins all had screened in front porches that were the width of the cabin.  It was wonderful to sit out there early in the morning to see the fog lift off the lake or late at night to hear the choir of frogs.  It was so quaint and something from another world.  Seeing as I was a city girl, this new world took me some time to process and learn how to relax.  At night we were gently lulled to sleep with the cooling breezes from the lake.  That was when I felt like we were in Mayberry and I fell asleep wondering when Andy or Barney or Opie would make their appearance.  It was maybe the middle of the first night, when I was just letting my guard down, when a blood curdling scream woke me up and sent me to the floor quivering in total fear!  I had never heard anything like that sound and was sure that some poor woman was being murdered by those awful river men.  Once your father was able to control his laughter he explained to me that the sound I heard was that of the loons calling out to one another.  Good gravy!  How would I ever sleep with that sound?  The next day, however, I was able to confirm the saying “he who laughs last, laughs best”.

Your father was the, and I am sure still is, very structured and regimented.  He has set bathroom times and was very regular.  The only time his schedule would be off was when he would be excited about fishing and then he was miserable.  Luckily, Edie knew this and brought along a remedy for him to use.  Prune Juice.  The first night we had dinner and were sitting around the table playing cards.  Your father was pacing and was so uncomfortable.  Edie was so happy to be able to offer a solution.  He poured a large glass, sat back down at the table, and chugged the juice within ten minutes.  Back out into the kitchen he went and refilled his glass.  We all sat in rapt attention as he chugged the second glass.  As we all stared at him, his face suddenly drained of color, and he jumped up from the table.   Luckily, we were playing cards in Lowell’s cabin so he did not have to race to the outhouse, but unluckily for us the bathroom was just feet from where we were sitting.  Much later he emerged from the bathroom totally wiped out.  The prune juice truly did the trick!  It was then that I started to realize that medical school did not do much in training doctors about foods/diets/nutrition.  Your father had no idea that prune juice would help his problem or that it would work as fast as it did or that drinking 32 ounces in one 30 minute time frame was not one of his smartest moves.

I will be forever grateful to Lowell for introducing me to my all time favorite meal.  Fresh fried walleye and fried potatoes and onions.  The nights that we were able to have walleyes that were treated to this meal was as close to Heaven on Earth that I can imagine.  There is just something so perfect, so right, so simple with eating fish that is right from the lake, just mere hours after it was caught.  It practically melted in my mouth.  Although we eat plenty of fish now, nothing will ever compare to that experience.  That meal was total satisfaction!

Oh that lovely note, in keeping with the Earth Day theme we had a spinach salad for dinner.   A sustainable meal that did not hurt the Earth.  Joy Rising! 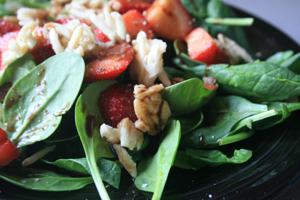 NOTE:  only make enough salad that will be eaten at this one time serving, as the salad will get somewhat soggy if kept for another day.   Or you can not dress the salad.  Just place salad on each plate and allow everyone to add their own dressing.  This way you will be able to keep the spinach/strawberry mixture for another day to two.