Dearest Boo,  once again I am late with my thoughts.  Your Uncle Mike’s birthday was ten days ago.  I did remember the date and I did get his gift to him in time, but I wanted to post this idea sooner.  It was a fun gift and I am sure that I enjoyed making the gift more than he did receiving the gift.  Fun, fun, fun for me!

“A friend is a brother who was once a bother.  ~Author Unknown”.  This sure does fit your Uncle Mike.  What a pain little brothers are and then I grew up and discovered what a charming young man he grew up to be.  Life was never dull when he was around and usually up to his antics.

Michael is a given name that comes from the Hebrew: (Mikha’el), meaning “Who is like God?” In English, it is sometimes shortened to Mike, Mikey, or, especially in Ireland, Mick.  Michael was a popular name among many royal houses of Europe for centuries; this was also the name of nine Byzantine emperors and a czar of Russia.  It has been in the top ten list since 1954 of the most popular names for boys.

Some notable Michaels – Michael is one of the Archangels, however, your Uncle Mike was not an angel.  Okay,  maybe when he was a wee baby he was an angel.  I remember that he had a horrible case of eczema all over his sweet little face.  His little cheeks were just so red and raw and so blistering and cracking.  It just hurt to look at this sweet face.  He was such a trooper during that time.  I remember that it seemed like he was allergic to everything.  We were always being reminded by your grandmother of things that he would have a reaction to if he ate it.  All I can remember is his being allergic to eggs, but I am sure that there were more things.

Famous sports Michaels – Michael Jordan in basketball and Michael Phelps in swimming.   I remember your Uncle Mike shooting hoops, just like Michael Jordan.  However, he was not your uncle’s favorite.  Magic Johnson was his “man” and I have to agree with him on this one.  The only thing better than Magic Johnson’s performance on the court is his performance off the court.  He is a true gentleman, both on the court and off.  His business enterprises are extremely successful and his is also a philanthropist and motivational speaker.   Uncle Mike picked a great sports hero in Magic Johnson.  Michael Phelps…what else can anyone say about this young man’s swimming accomplishments?  He has won fourteen Olympic gold metals, broken thirty-seven world records in swimming, and eight gold metals in a single Olympic.  Uncle Mike can swim, not Michael Phelps swim, but he can swim.  Aunt Charlotte tells the story of one time that Uncle Mike wanted to go swimming.  Only problem being that the swimming pool at the local park was locked for the night.  That did not stop him.  Somehow he was able to talk Aunt Char into climbing the fence and taking a midnight swim.  Another thing Uncle Mike has in common with Michale Phelps – they are were tall and lanky and had nicknames.  Michael Phelps was called “Gomer” in reference to “Gomer Pyle” a good natured, naive country boy.  Growing up we called Uncle Mike “Skeletor”, as he was so gosh, darn skinny.  He looked like all he had was his skin hanging on his bones.  Kind of a play on the character from He-Man.  You remember He-Man….one of your all time favorite cartoons.  Uncle Mike would eat and eat and eat and never gain a pound.   I was so jealous.  These two Michaels also had another thing in common, but that is a story for another day!  It involves “oregano”.

Then you have the fighter, Mike Tyson.  Mike Tyson has a temper and several of his assaults outside of the ring are well documented.  Your Uncle Mike had quite a temper growing up.  You could always tell when he was getting ready to let go of his anger.  His face would turn a bright red color, his body would stiffen, and his hands would start to ball up in a fist.  That was a giant clue for all of us to exit, stage right, get out of Dodge, make like a tree and leaf.  However, for some bizarre reason I felt that I could save us all by creeping up behind him and capture him in a giant bear hug.  What was I thinking????!!!  Lordy!  That was like waving a red flag in front of a bull!  He would start to struggle and I would hold on tight and be laughing.  Then I would realize that he was not laughing and I was in deep, deep trouble.  I could not let him get free or I would be in big trouble.  Not that I thought he would ever hit me – he was and still is one of the kindest, gentlest men I know, he would lay down his life for a loved one.  What I feared was that I would continue laughing, he would get angier, and I would laugh so hard at his frustration that I would pee my pants.  Nope, that would give me a nickname that I NEVER wanted to have.  So, what did I do?  I hung on for my dear life.  I remember having my arms and legs wrapped around him and we were on the ground. He was struggling so hard to get away and I was struggle so hard to make that not happen.  What was I thinking???

One of my favorite Michaels is Michael J. Fox.  Like your uncle, Michael J. Fox is a hard worker, compasionate and a dedicated father.  His compassion and dedication to his job is evident with the care he gives to all the disabled individuals he helps at the center.  He takes great joy and pride in his job and the work he is doing there.  And there is no one that can ever doubt the love and joy he has for being a father and the pride he has in his two sons.

So, for all of these reasons I decided that a rainbow to celebrate his birthday was appropriate.  Afterall, I wanted him to know that the was our “pot of gold” at the end of our rainbow.  Joy Rising! 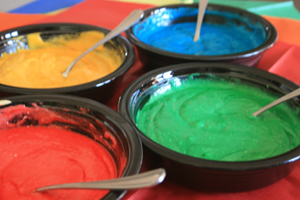 No real recipe for this one. 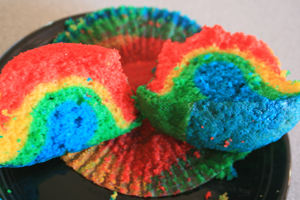 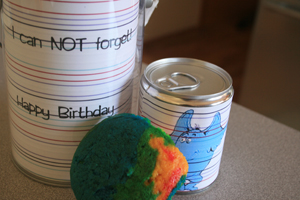 The best part, for me at least, was the presentation.  I placed the cupcake into an “unopened” tin can and put that tin can into a plastic, new and unused, paint can. Here is a picture of one cupcake inside of a tin can.  I could tell you how I did this, but why spoil the mystery???