Dearest Boo.  This is such sad news.  An honorary member of our family died.

The Pillsbury Doughboy died yesterday of a yeast infection and complications from repeated pokes in the belly.
He was 71.  Doughboy was buried in a lightly greased coffin.  Dozens of celebrities turned out to pay their respects, including Mrs. Butterworth, Hungry Jack, the California Raisins, Betty Crocker, the  Hostess Twinkies, Captain Crunch, Tony the Tiger, Lucky Charms Leprechaun, Cocoa Pebbles, Snap, Crackle and Pop.

The grave site was piled high with flours.  Aunt Jemima delivered the eulogy and lovingly described Doughboy as a man who never knew how much he was kneaded.

Doughboy rose quickly in show business, but his later life was filled with turnovers. He was not considered a very smart cookie, wasting much of his dough on half-baked schemes.  Despite being a little flaky at times, he still, as a crusty old man, was considered a roll model for millions.

Doughboy is survived by his wife, Play Dough; two children John Dough and Jane Dough; plus they had one in the oven.  He is also survived by his elderly father Pop Tart.

I have a tender spot in my heart for Doughboy.  Three years ago I made a New Year’s Goal that I would create a recipe to enter into the Pillsbury Bake-Off.  This contest is held only every other year and the winner, along with a entire kitchen of large and small appliances, wins one million dollars!  the rules stated that there would be two winners from each state.  Aaaaaaaaaaaaaalllll right – let me at this goal.

The rules/guidelines were downloaded and I set out to figure out which category I would enter.  There were five to pick from and I picked Mexican, as that is one of your favorite cuisines.  Your recipe needed to contain at least three General Mills (Doughboy’s boss) products.  This was not a difficult thing to accomplish as they own so many other companies like Green Giant, El Paso, Jif, Smuckers, Crisco, Eagle Condensed Milk, Land O’ Lakes, Hershey’s, and Fischer’s Peanuts.

What to make, what to make??  With your cousin, Catherine, we had made “Mexican Lasagna” – would that work?  I could use El Paso corn tortillas, but then I struggled.  We had made “Nacho Pie” before and that used Pillsbury canned biscuits and some canned corn.  I just could not make my brain grab that third product.  Until, one night I was making you one of your favorite soups, Beer Cheese.  As I looked at the ingredients the light bulb moment went off.  I was already using Pillsbury flour and Land O’ Lakes butter in my roux.  This would be easy to find a third product.

Checking the pantry I found a can of Green Giant Corn.  It was okay, but not quite the winner.  Next try I used some canned biscuits to make “bread bowls” as the container for the soup.  Failure.  Then I found the canned pizza crust.  I draped portions of it over inverted bowls and baked into bread bowls.  Failure.  I was like a mad scientist working weekly/daily on this experiment.  We were sick of eating soup, so the poor people at work were getting all the leftovers.  Luckily there were lots of young men who were like human garbage disposals, eating anything and everything in their paths.  Then Pillsbury came out with a new product – “Crescent Creative Creations”.  It’s the same dough as their crescent rolls, but without the performations.  It worked just like the pizza dough, but a buttery flavor that I preferred.  Better, but still not a winner.  What to do, what to do.

I would not admit defeat, even though the entry deadline was closing in fast.  Then it hit me…………I wanted to do something for the Mexican portion and my recipe was not at all Mexican.  Dah!!  So, on the next attempt I dumped in a jar of El Paso Salsa.  We love it.  My fellow workers loved it.  But I just could not leave well enough alone.  One the next attempt I added one more ingredient.  Better, but I could make it better.  It just needed one more thing to take it over the top.  I added that last ingredient and it was perfect, in our opinion.  But we were wrong.  Last night I tweaked this recipe again and now it is a perfect meal.

The next day I filled out the entry form and sent it off to General Mills.  Six months later they published on their website the finalists.  With bated breath I logged on, sure that I would find my name in the section for our state.  There was only one finalist from out state…………was it me?  Could it be??  The finalist from out state that year was a recipe for Peanut Butter and Jelly Pizza!  Seriously?  W O W.  I was not a finalists……………say what??  I was sad, but in all honesty I did accomplish my goal.  I wanted to create a new recipe, enter the contest and I did.  I did not need General Mils to tell me that I was a winner.  By accomplishing my goal I was already a winner.

I was wrong………….last night I tweaked this recipe again and now it is a perfect meal.Yeah! 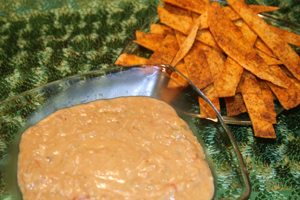 Cook  Time: 3 – 4 hours  (most of this is the simmer time to allow the ingredients to marry)

Serve with crush Doritos on the top for extra “crunch”   (we use Nacho Cheese flavor).