Dearest Boo, I saw this on “YouTube” and I just had to share it with you.  It reminded me of one of my favorite Bible verses:  Isaiah 11:5-6  “Righteousness will be his belt and faithfulness the sash around his waist.  The wolf will live with the lamb, the leopard will lie down with the goat, the calf and the lion and the yearling  together; and a little child will lead them.”  The “sash around his waist” part reminds me of our seat belts and how they are a sash around our waists.  And the part about “a little child will lead them” reminded me that it was our children who lead the campaign to buckle up and wear our seat belts.  This video clearly brings home the fact that when you are in a car accident, and not wearing your seat belt, it is not just you that will be injured.  It will be every member of your family, they, too, will be hurting when you are hurting.  I love the image of the daughter wrapping her arms around her daddy, as if she were the seat belt.  And the wife wrapping her arms around his chest, as if she were his shoulder harness.  Beautiful and thought provoking.

I remember that when you were young people just did not wear seat belts.  For what ever reasons we just were not getting the message.  Then you started school and were “brain washed” in a good way about the importance of wearing seat belts.  You became the police dog who has been trained to attack and not let go.  Every time we got into the car if we were not wearing our seat belts you were this little “Seat Belt Nazi” who would insist that everyone buckle up or else!  Your voice took on the characteristics of Regan, in “The Exorcist” when the devil would take over her body.  I was fearful of you and did not want to see your head spin around if I did not buckle up – so I did.  And am I ever grateful for that powerful lesson.  In that case a little child did lead me to practice better safety.

To be honest, I thought that all children in your school were being “brain washed” in the same manner, but one incident brought that into focus for me.  We were selling our van and our good friends (Beth’s of “Beth’s Dip” fame) were considering buying it from us.  For some reason I had the two boys (ages about five and three at that time) and we needed to go on an errand.  We loaded up into the car and I saw that they were not putting on their seat belts.  I explained to them that they needed to buckle up, as the van would not not move until everyone had on their seat belts.  They buckled up and we took off.  About ten minutes into our drive I heard a seat beat come unbuckled, so I said that the seat belt needed to get buckled or the van would stop.  I did not hear a “buckle”, so I pulled to the side of the road and sat there until I heard that little “click”.

About a week later I heard the boys version of what happened.  It seems that the five year old came into his home crying his eyes out telling his mother that he did not want them to buy our van.  When I told him that the van “would not go” unless everyone’s seat belts were buckled I meant that I would not put the car into drive.   Bless his little heart – he understood it to be that the car itself would stop all by itself until all seat belts were buckled.  He did not want this “monster robot” van!  What a kill!  Their little brain logic just is not capable to make the leap that it is the driver controlling the car – not the car controlling itself.

Speaking about a little person’s brain logic, I still cannot get over the fact that when you were a munchkin you loved mac and cheese.  However, you did not like the homemade kind.  Oh no, the ONLY type you would eat was the Kraft Blue Box.  I could hardly believe it.  My little Foodie did not like the homemade kind with four cheeses.  Our backyard neighbor was an excellent cook and I so envied her skills.  One time we were sharing stories/recipes for mac and cheese.  I had to laugh.  She could not make mac and cheese, so she only made the Kraft Blue Box and her daughter hated it!  We laughed and said that we should plan mac and cheese on the same night and trade daughters for this one meal.  We never did, but it was an interesting thought.  I am so thrilled to know that as your body grew, so did your taste buds.  You now love home made mac and cheese.  This recipe is a bit lower in calories (385/per serving) and I was able to sneak in some veggies (both zucchini and asparagus), however calories from fat is artery clogging (82%).  Pretty sure that next time if I use fat free sour cream and milk it will be better.  Joy Rising! 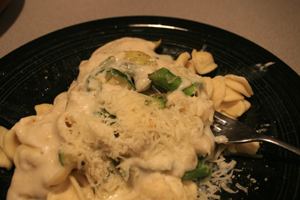