Dearest Boo,  in the book “Alice in Wonderland” by Lewis Carroll, beloved by so many children and made into a cartoon from Disney and now a wonderful movie.  This beloved story is almost 150 years old and the style of the story telling is still popular today.  One of your favorite musicals we were able to see last year was “Wicked”. Another all time favorite story is that of “Peanuts” where the dog, Snoppy, has very human traits.

The story of “Alice” starts when the Reverend Charles Lutwidge Dodgson and the Reverend Robinson Duckworth rowed in a boat, on July 4th, 1862 up the River Thames with three young girls (Lorina, Alice, and Edith) in their charge.  To while away the time the Reverend Dodgson told the girls a story that, not so coincidentally, featured a bored little girl named Alice who goes looking for an adventure.

The girls love the story, and Alice asked Dodgson to write it down for her.  After a lengthy delay, over two years, he eventually did so and on November 26th, 1864 he gave Alice the handwritten manuscript of “Alice’s Adventures Under the Ground”, with illustrations by Dodgson himself.

It tells the story of a girl named Alice who falls down a rabbit hole into a fantasy world populated by peculiar and anthropomorphic (animals/plants that are given “human” characteristics and features) creatures.  The tale plays with logic in ways that have given the story lasting popularity with adults as well as children.  It is considered to be one of the best examples of the literary nonsense genre, and its narrative course and structure have been enormously influential, especially in the fantasy genre.

When you were a wee one we did have so much fun reading the story and having our very own tea parties.  It was so cute to see you acting like a grown up lady having tea with the Queen of Hearts.  It was during this time that we started collecting all kinds of teapots and we started the tradition of having a pot of tea every night in your bed, talking over the events of your day.  It was such a treat for me to hear about what was important to you that day.  How school went, how you were doing in 4-H, how were your friendships going, what fun things you experienced.  It was my favorite time of the day and all too soon you were in middle school and this tradition ceased to be.

After Alice had fallen down the rabbit-hole and had passed through her first transformation, when she shut up like a telescope until she was only ten inches high and then grew bigger and bigger until ‘her head struck the roof of the hall’, she became confused as to her identity. To make sure of it, she tried to repeat a little poem which everybody in those days knew by heart, and to such children is was very funny when it came out all wrong and Alice says,

The Spider And The Fly
Mary Howitt

‘Will you walk into my parlour?’ said the spider to the fly,
Tis the prettiest little parlour that ever you did spy,
The way into my parlour is up a winding stair,
And I’ve got many curious things to show when you are there.’
‘Oh, no, no,’ said the little fly, ‘to ask me is in vain,
For whoever goes up your winding stair can ne’er come down again.’

However,  Dodgson’s version in the story:

“Will you walk a little faster?” said a whiting to a snail.
“There’s a porpoise close behind us, and he’s treading on my tail.
See how eagerly the lobsters and the turtles all advance!
They are waiting on the shingle–will you come and join the dance?

Now, you may wonder where in the world is this story going?  Does it have any logical end?  Well, here is the deal.  I have been doing some crafts that I discovered on the internet.  I found this simple bird feeder/bath that I thought was so adorable I just had to try it out.  Once I had all the materials gathered it took me maybe two minutes, plus drying time for the epoxy.  Since I put it into the front pond garden it has been such a joy to sit in the living room window and watch the activity.  Next project is to make a butterfly feeder.  Here is a picture of the famed bird feeder/bath. 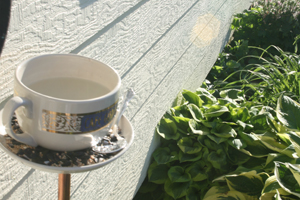 The cup holds the water for the bath, the saucer holds the food for the feeder portion and as an extra bonus I added the spoon (on the saucer on the right side) as a bird perch.  It’s like sitting on a bar stool in a diner eating at the bar, but for birds.

Knowing that we were going to have chicken for dinner that night I did feel a bit guilty.  It’s like I was luring the poor birds to their last supper.  And all that thinking was really goofy, as we were not eating Redwing Blackbirds, we were having chicken.  Pretty sure that if a chicken could manage to climb up the copper pole two feet to get to the perch, everything would fall to the ground from the excess weight.  For some reason the words “come into my parlour” kept playing in my mind as I watched the birds.  Weirdo!  However, on the upside, the birds are happy with their new “Bed and Breakfast” and I am enjoying watching Mother Nature’s creatures.  Joy Rising! 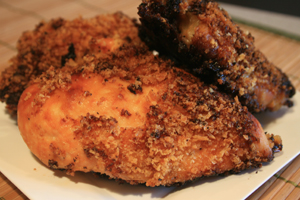 Source: I have no idea!!