Dearest Boo,  for me this coming Tuesday, April 13th, will be such an exciting television night.  Just warning you now, I will be on “Do Not Disturb” from 7 P.M. until 10 P.M.

Tuesday nights have been my favorite television night since September 2003 when “NCIS” first aired and I was able to spend one hour with my “television husband”  Mark Harmon.  I have so loved this man since he first played in the television series “St Elsewhere” and “Chicago Hope”.   That scamp just stole my heart!  Then he moved on to play a role in “The West Wing”.  Yeah!!  Even though he was the quarterback for UCLA and helped to engineer the stunning upset of our Cornhuskers in 1972, I don’t want you to hold that against him.  He is a fine and gracious man.  Most importantly, he appears to be a wonderful husband and father.  Two qualities that I feel are super important things to look for in a man.  And it sure does not hurt that he is a real cutie patootie. 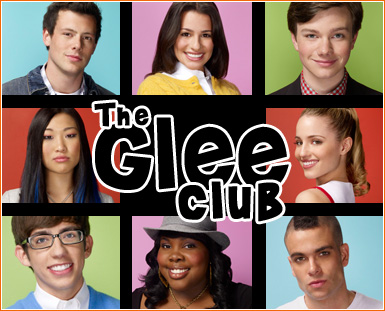 Next for my viewing pleasure is “Glee”.  It is wonderful seeing a program that is supporting the arts in our schools, as right now the cuts are continuing for the arts in our school system.  When you were in high school you were on the golf team and, of course, all your horse riding competitions.  Even though, as you are fond of telling me, that I cannot sing when you expressed interest in trying out for the choir at your high school I was thrilled.  I remember what fun I had when I was in the Girls Glee Club at my high school a hundred years ago.  However, neither one of us were in a glee club, such as “New Directions” at William McKinley High School in Lima, Ohio.  My glee club never had costumes or robes and I am guessing that you wished your choir was the same.  I will always remember that horrid teal taffeta dress with the puffy sleeves and the hemline about six inches above your ankle.  Oh, the 1990’s were awful for so many reasons and the clothes were at the top of the list.  I found this picture online that is pretty close to the color and the bodice and sleeves.  The skirt portion was much fuller and just about this length, but this will be enough to bring back the horror. 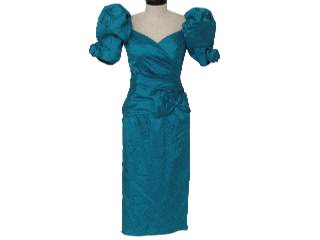 How you and the rest of the choir girls hated this dress.  It was hot under the lights and just plain ugly.  I will never understand the choir director’s mind when he picked out this dress.  Your best friend, Jessica, was in the choir and felt the same way.  I remember the night, at the end of the school year, when you came to me dress in hand.  The girls from the choir were getting together for a bonfire and you were leaving to go get Jessica.  Oh, how tender!  You were all going to dress up one last time in your choir dress and sing around the bonfire.  It was later that night when you came home and shared “the rest of the story”.  Jessica’s parents knew what was going on and refused to let her participate, so when you pulled into her area you turned off your headlights and idled your car.  Out her bedroom room came floating to the ground a teal taffeta fluff ball and right after that Jessica scrambled out the window out onto the first story roof and down to the ground.  What I did not know and, apparently Jessica’s parents did, was that you rascals were going to toss your dresses into the bonfire.  Not that I would have protested; those were some ugg-a-lee dresses!  I might have even given you some matches to start the fire.  The dresses all melted into black, molten globs never to be seen by human eyes ever again.

Back to the television series, “Glee”.  I so enjoy this show because it appeals to the outsider in me.  During high school I was always on the fringe, just skating through totally under the radar.  I like it’s sense of humor, how it appeals to both young and old, and how they are able to mix show tunes with current tunes.  The young people all have such amazing voices.  I truly hope that they never “graduate” from McKinley and the show will go on forever. 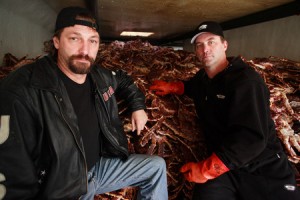 And for the final “storm” of the night – “Deadliest Catch”.  Tuesday night starts it’s sixth season and we have been watching it since the beginning.  It’s a reality show about the crab fishing fleet in the Bering Sea and follows them through their two fishing seasons.  The fall season is for the king crab and the winter season is for the opilio crab.  Each episode takes the viewers onto the boats to experience what it is like to have one of the deadliest jobs.  Not only do you see the treacherous weather conditions, but it shows (as best it can) what’s it’s like to live in close quarters with little sleep and crew conflicts.  There are maybe eight to ten crew on each boat that are out on the Bering for three or four months at a time.  Not only are they are family on each boat, but since the fleet is fairly small, they are a family to every other boat.  Just like in a family there are fights between brothers on the boats and between the captains.  It must be very difficult for these men who are married to return home and switch gears.  I wonder how long it takes for them to be able to relax and enjoy being on land?  Maybe they never truly relax.

I have pictured my two favorite captain, Jonathan and Andy Hillstrand, of the Time Bandit.  Jonathan is the captain during the king crab season and he is just a real scamp.  He reminds me so much of my old boss, Sully, both in looks and actions.  The both know how to work hard and how to play hard.  And the pranks that they play on their team are just naughty and fun – as long as it is not directed at you.  Andy is the captain during the opilio crab season.  He is gentle and fair.  During the off season he is at home with his wife and two daughters on their horse ranch in Indiana.  Like my television husband, Mark, Andy appears to be a loving husband and father.  It would break my heart to know that this is not true.

Anyway, for your convenience I have the countdown clock on this post so that you will know when the “Do Not Disturb” time goes into effect.  I am so excited!

Since we had such a great, non-healthy dinner last night to celebrate your birthday I thought that tonight we would be a bit healthier with a salad.  I’ve been watching the Jamie Oliver series, “Food Revolution”, and made the chicken strips from the website.  After they were fried I cut them into smaller cubes and placed them onto a nice bed of lettuce for our Chicken Salad.  It was delicious and filling.  Joy Rising! 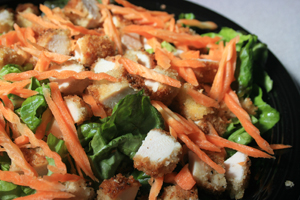 I have also mixed things up a bit by not cutting into strips.  Pound the chicken breasts until they are 1/2″ thick.  Do the same mustard, egg white, bread crumb/Parmesan cheese coating and fry until brown on both sides.  Then I would top cooked spaghetti with the chicken breast, cover with favorite marinara sauce (spaghetti sauce) and sprinkle with mozzarella cheese.  Place in microwave for 30-45 seconds, just long enough to slightly melt the mozzarella cheese.