I have always enjoyed watching “The Sound of Music”.  The music just makes you want to sing along.  My favorite part in the “Sound of Music” has always been “How do you solve the problem like Maria?”  It’s a part of a song that seems to have buried itself in memory.  Even when I was in high school, Music class started with “doe a deer a female deer...” or “when you know the notes to sing…” I have even be known to sing this out loud when the words entered my mind, much to your embarrassment and dismay.  Of course, my singing was never limited to music from this movie.  One of our night time ritual, when you were wee tiny, was to climb into our glider rocker, cuddle under your blankie and I would sing to you.  Okay.  Maybe “sing” was not what you heard.

I will always remember the time when you were about eighteen months old and we were doing our rocking/singing ritual.  There I was, singing my heart out with some wonderful, endearing bedtime song to help end your day and get you ready to sleep.  You had such a pained look on your face and crying big, huge tears.  You were so desperately trying to tell me something, to get me to hear something, something that was clearly very important to you.  So, like the dear, wonderful Mother I am I stopped singing to hear what you had to say.  I looked at you tenderly and with all the mothering instincts I could muster asked you to tell Mama what was the problem.  You opened your hand, extended your arm and reached out for my lips for me to give your precious, sweet, little hand a kiss.  But no………your vicious claw was clamped down tight on my mouth and in a very clear voice said to me,  “No, no, Mommy.  No sing!”  No sing?? What was with this?  Was it the song?  Okay, I tried another song.  Again with the claw and the pleading.  After about five different songs, all causing the same reaction, my pea brain realized that it was my singing.  My singing was hurting your ears.  How humiliating was that?  I was living with a two year old Simon Cowell and you were clearly voting not to send me to Los Angeles.

I thought that your reaction was just that of a “terrible twos” and you would grow out of it, but just in case I tried not to sing in front of you.  However, as I was to learn, my singing had scarred you for life.  It was the summer of your eighth grade and I was one of the sponsors for your church youth group trip to Kansas City.  You all were in the back of the cvan laughing and talking and having a wonderful time.  I wanted to entertain myself, so I turned on the radio to a channel playing the “Golden Oldies” and started my song fest.  One of the girls in the front seat finally turned to me and told me that “Megan was right”.  Megan was right about what?  Your singing, you can’t sing.  Horrors!  You were right and have been right for years.  Oh well, that did not stop my singing.  I still sing in the shower and in my car where I am my own audience and you know what?  I am awesome!

Oops, I need to get back to the story.  One of the songs in “The Sound of Music” is “How Do You Solve a Problem Like Maria” makes me think of discipline.  And discipline makes me think of Mexican.  This is one of our favorite stories about you and your father.  For us it will always remain one of the greatest mysteries of life.  One of our favorite restaurants was this Mexican restaurant that was own and operated by a second generation Hispanic family.  They served one of the best and biggest tacos that we have ever had and you loved it.  We ate there at least two times a month for over a year and you always ordered the taco.  This taco filled a dinner plate and it was enough to feed the both of us and we did not leave hungry.  One time when you were about eight your paternal grandparents were visiting and we decided to take them there to eat.  You and I were so amazed, as your grandparents did not like to go anywhere where they could not order “American” food.  Eating pizza was a pretty risky and the only fast food place they truly enjoyed eating was at a McDonalds.

We were some of those parents that took their child with them when they went out to eat.  I know that every parent says it, but for us it was true.  You were never any problem at a restaurant.  We brought you things to do to entertain yourself until your food arrived and once it was there you were busy eating.  From a young age you were a “foodie” and loved eating out.  You knew how to behave in public and I cannot recall having any problems with you – just with your father.

Your taco came and you started to eat it the same way that you had dozens of times before – you picked it up.  It was at this point that your father told you to put it down and eat it with a fork and knife.  Both of us thought it was a joke, that he was kidding.  We both kind of smiled and you continued to eat your taco with your hands.  Your father reached over and pushed your hands back onto the plate telling you that he meant it.  If you touched it again with your hands you would have to go to the car and sit there alone without any dinner.  Neither of us believed him, as he had never had anything like this before.  You just looked at him with a defiant, incredulous look, raised your pointer finger and deliberately touched your taco!  This was the line in the sand and you had crossed it.  He pulled you out of your chair and took you to the car.  I just sat there, stunned, as we had never witnessed this behavior before from your father.  I was sure that he just took you outside to discuss the situation to end the embarrassment for all of us and you would both be inside shortly.  He came back alone.  I asked where you were and when he said you were in the car I left the table and went to be with you.  It was about thirty minutes later when they had finished eating and joined us in the car.  When asked he never would or could explain why he reacted that way.

It was a few months later that you and I were able to find humor in this episode and could laugh at it.  We have never been able to figure out what in the world caused your father to react this way and he never treated you that way again.  It’s now been almost twenty years later and we still laugh at it.  As to why he did what he did……….nuts, I got nuttin.  The good news is that this has not affected you – you still eat in restaurants, you still order tacos and you still eat them with your hands!  Joy Rising!! 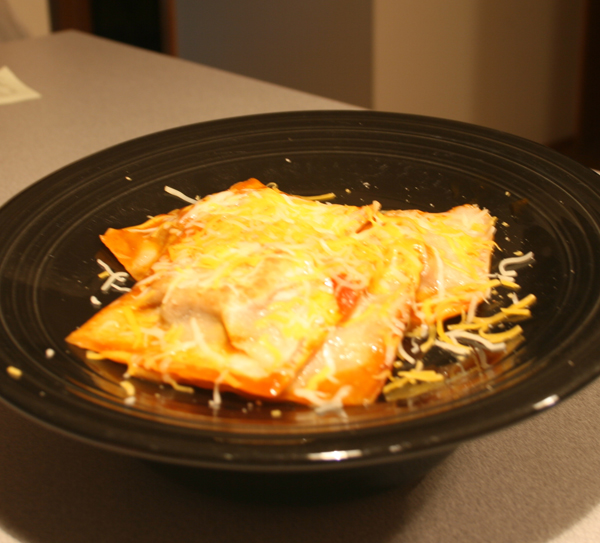